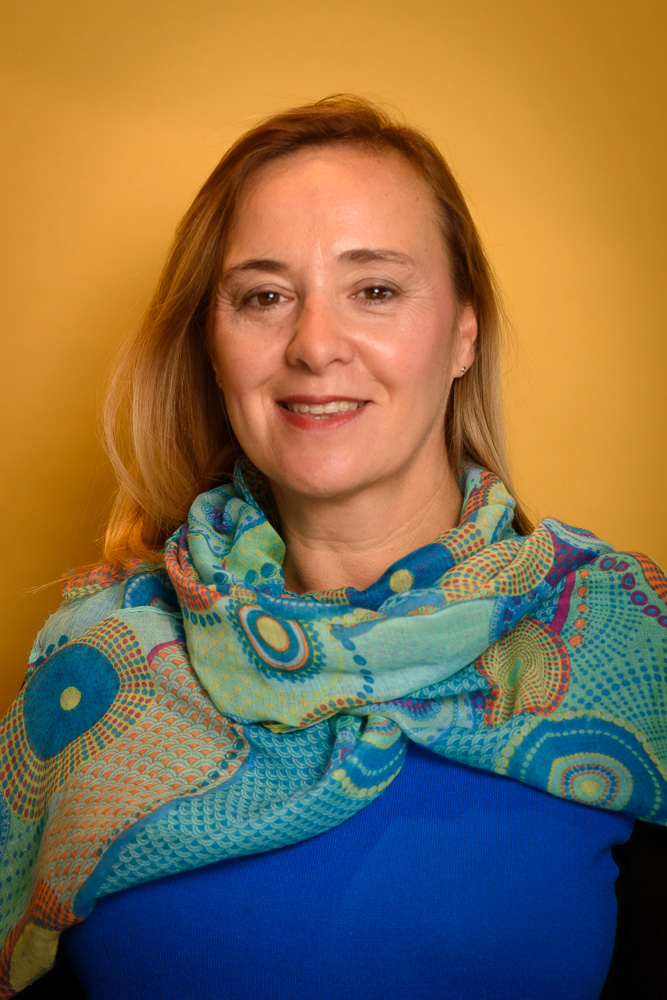 Anabela
“Some people live at 3,000 meters above sea level, but I live 4 meters below sea level”

I am Anabel Garcia, born in 1969. In 2018 I arrived in Almere. I live in a neighborhood called Literatuur Wijk. This is my story:

I was born and raised in Junín, a city of 100,000 inhabitants in the province of Buenos Aires 260 km from the capital. It is famous because Atahualpa Yupanqui and Evita Perón lived there. Junín is an agricultural region of fertile land in the heart of the humid Pampa where Italian and Spanish immigrants who started their lives in America fleeing from wars and poverty settled.

I had a privileged childhood. I went to school, I had time to play and to learn. During my adolescence I was sporty: I did triathlons, swam, and played volleyball. From the age of 15, I was a political activist and was already involved in several social projects. At the age of 18, I won a scholarship to study the Russian language and literature in the USSR for six years. I lived and studied in Moscow from September 1989, before the fall of the Berlin Wall, until 1995, when I graduated.

My life from the age of 18 until today has been to migrate from one country to another by personal decision and out of curiosity. It was clear to me that I did not want to get married or have children. I lived six years in Russia, five in England, nine in China, two in Ecuador, one in Brazil, and two in Spain, in the Canary Islands. My mainstay has always been teaching foreign languages. I have taught Spanish, Russian, Chinese, and English to children and adults all over the world.

I visited the Netherlands for the first time in 1990 as a tourist. I came with Joeri, a Dutch boyfriend I met in Moscow while he was studying piano at the conservatory. I remember his mother waiting for me with flowers in Hoek van Holland on the platform of the train coming from Moscow. It was my first time in Western Europe. The Netherlands impressed me by the social harmony, the architecture, and the tranquility in the streets: people were not worried about the economic situation of insecurity. The Dutch seemed content with their lives, enjoying their free time, parks, art, music, and culture.

The first period I lived in the Netherlands was from 2000 to 2003 in The Hague. First I studied the language at Albeda College in a state course and then I worked in a company. In 2003 I wanted to realize a dream I had pending; to learn Chinese. So I left everything, and from the Netherlands, I went to Changchun, a city in the northeast of China where in winter it is minus thirty degrees Celsius (-30º). For nine years I was a Spanish teacher at Jilin University in Changchun for undergraduate and graduate students. The same university awarded me a scholarship and I pursued a doctorate in Chinese language, phonology, and acquisition of Chinese by Spanish speakers. For love, I left China for Ecuador, Brazil, then Spain, in the Canary Islands, to finally reach my current destination, the city of Almere in the Netherlands.
This second migration to The Netherlands was in 2016 with 46 years old, a suitcase of 35 kilos, and knowledge of the language and culture. I came back because this country gives me peace and the economic freedom to lead a dignified life. In 2018 we bought our house with my boyfriend Wim. We chose Almere because of work because it is a strategic location in the heart of the Netherlands and it is 13 km from Naarden, where his family lives. During the Covid we cycled every week to Naarden from our house in Literatuurwijk, around the Gooimeer, enjoying the scenery, the water, and the parks of the Polder. For me, I am thrilled to know that Wim's grandfather, Jan Hof, was one of the pioneers of the Noordoostpolder and dug ditches with a shovel in the 1930s to create this land where we live, "the largest polder in the world". Some people live at 3,000 meters above sea level, but I live 4 meters below sea level.

I am happy living in this city, and at 52 years old, if I had to live again, I would do exactly what I have done. I had the privilege of visiting 53 countries, meeting interesting people, learning and appreciating other cultures. The education I received in Argentina, a humanistic and solidary education, were and are the tools that I will always carry with me in my life.

Although I was born and raised in Argentina, I feel like a citizen of the world. I studied six languages to be able to understand how people are happy, how people suffer, and to be able to do my bit through education and multicultural understanding.

My motto is: "We are in this world to serve others, where there is only one race, the human race".